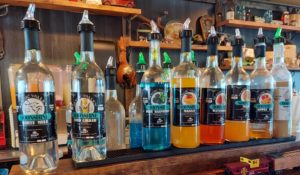 By Tess Ficcaglia
Most people, when they hear the word “moonshine”, think of prohibition, illegal stills and fast cars.  In fact, I am sure most of you know that is how professional racing got its start.  Transporters had to have faster cars than the law enforcement trying to stop them.  The 21st Amendment was adopted and distributors found another avenue to show off their mechanical and driving prowess.  Hence, NASCAR began.
Today you can walk into most liquor stores and purchase any number of flavors of moonshine.  With the right patents and legal paperwork moonshine is distilled in numerous states around the country.
Jerrod Henry took it one step further though.  With his own brand and recipes of moonshine he opened an establishment right here in our South Padre Island paradise that serves his infamous moonshine legally.
Henry is our very own resident celebrity.  After winning the distinction of Master Distiller in March 2020 on the TV show, “Moonshiners Master Distillers” airing on the Discovery Channel, he was another step closer to his goal of manufacturing his brand of moonshine.  He wowed the judges with his version of Mexican moonshine, Mezcal de Peducha.
According to Henry, it takes a lot of networking, reading, and experimenting to make a fine moonshine recipe.  He knows because he has been making moonshine since he was 18 years old.
Growing up in the Ozarks of Missouri, everyone had a still.  Mostly because the counties in the mid-south were dry. This meant you could not buy liquor of any kind.  Most of those laws have changed throughout the United States now.
Henry always knew he had something special and he started his journey to share his unique blends with us lucky south Texans.
His first store front location was in operation in Los Fresnos.  In February 2022, he moved the distillery to its present location, 110A North Garcia Street, Port Isabel, Texas, at Lighthouse Square, at the foot of the causeway bridge. You can’t miss it.
During prohibition there were no regulations.  You never knew what you were getting in those illegal back woods filled mason jars.  Now you can purchase moonshine from licensed vendors like Rio Grande Distillery. It is the Valley’s first and ONLY distillery.
They offer a Sample Flight Tasting for $7.00 to try 7 flavors.  White Mull is a silky smooth fine sipping shine. Corn Likker is straight up whiskey shine used for mixing.  A refreshing watermelon, cantaloupe, mango and blue raspberry are the bomb over ice.  To describe Apple Pie I can only say “it is just like Nana made”.  I can smell the aroma coming from the oven as the taste hits the lips.  This is the oldest flavored shine recipe that has stood the test of time for over 300 years.  Henry also makes a great dessert shine Moonchata, which is a deliciously smooth, sweet, cinnamon flavored Mexican Horchata after dinner sipping shine.
Rio Grande Distillery offers a variety of mixed drinks as well that are all made with house moonshine. The Moonshine Maggie Margarita is Henry’s take on the Mexican favorite, but with a moonshine twist.  Try any of the Aguas Frescas, Lemonades, or Teas and I’m sure you will find several to your liking.