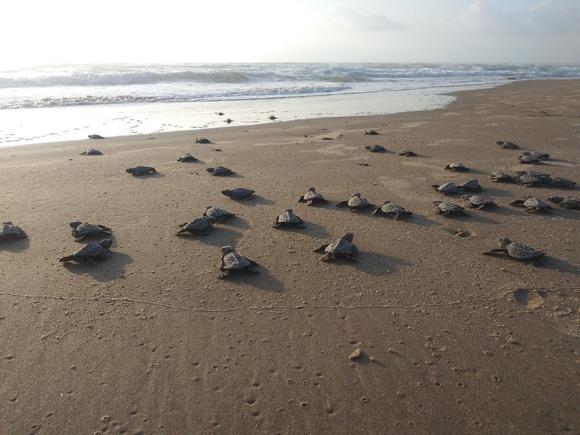 Each year, sea turtles emerge from the sea and visit the shores of South Padre Island and Boca Chica Beach to nest.

April marks the beginning of sea turtles’ nesting season, which means many female sea turtles are en route to finding the right spot to lay their eggs on the beach.

Now through August, Sea Turtle, Inc. interns and volunteers will conduct patrols in the 50 southernmost miles of Texas’ beaches to look for nesting sea turtles and nests.

“We send out patrollers every single day so we’ll have multiple patrols occurring so that we can hopefully encounter every nesting female or at least encounter all of the nests if we miss a nesting female,” chief conservation officer Dr. Amy Bonka said on Tuesday. “We haven’t had a nester just yet.”

According to personnel, Kemp’s ridleys are critically endangered due to decades of egg harvesting in their primary nesting grounds of Rancho Nuevo, Tamaulipas, Mexico and mortality related to shrimp fisheries before turtle excluder devices were implemented.

Since 2007, Sea Turtle, Inc. has participated in bi-national efforts to protect Kemp’s ridleys and other sea turtle species that visit the area to nest.

After the nesting female safely returns to the ocean, the eggs are excavated and relocated to a hatchery at Sea Turtle, Inc. for safe incubation.

“Our goals are to ideally encounter every nesting female that we come across so we can work her up for data collection as part of various different studies, as well as collect and protect the eggs,” Bonka said. “We move the eggs to protected egg hatcheries that protect them from vehicular traffic, high tides, predation and things like that.”

Hatchlings emerge from the nest cavities after a period of 45 to 55 days.

Bonka said Sea Turtle, Inc. is not planning any public releases right now due to COVID regulations, however, releases will be streamed on Facebook Live, as time allows.

According to Bonka, nesting Kemp’s ridleys nest during the daytime.

Bonka said if anyone does come across a nesting female, they should stay at least 10 feet away from the turtle to give her plenty of space to nest and call Sea Turtle, Inc.’s emergency hotline.

“We have a phone number that is monitored 24/7 for stranded or injured sea turtles, but also for nesting females as well,” Bonka said.