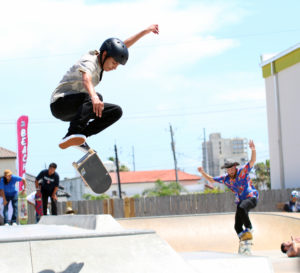 On June 21, 2022, South Padre Island history was made on National Go Skateboarding Day. The South Texas skate scene rallied together to commence the first ever skate competition at the new, and only, skate park on the Island, located at John L Tompkins Park.

14 years ago Kerry Schwartz began his battle of trying to get a skate park built on the Island. He even had an ad placed in the PRESS which pictured his daughter, Kenna Schrwartz, who was six years old at the time, with a skateboard. According to him, the ad loosely read “Why is it every time kids on the Island want something, we are always told ‘there’s no money’ but yet you can spend all this money on adult things.” This was the problem in Schwartz opinion; not enough of the Island’s spending was catered to the youth.

“Skateboarders kind of had a negative image in our community. A lot of people on the city didn’t want to see a skate park here,” said Erica Lerma de Macaulay, owner of 77 Surf, and member of S.P.I.T.S., who says that she remembers skating in empty pools and parking lots while growing up on the Island.

The skate park had the support of Barry Patel and Alex Avalos who were on the city council, and pushed to build a park system for the Island, but when Patel left office, the efforts began to drag, according to Schwartz.

“I had a council that wasn’t receptive to putting in a skate park,” said Schwartz.

Schwartz decided to run for city council, along with Joe Ricco, and after they were elected, Schwartz continued his push for a skate park.

“Quite frankly, the council got tired of me talking about it,” said Schwartz.

The city began applying for grants to fund the park’s construction, but another factor that played a huge roll in the skate park coming to fruition was a group of young skater girls who banded together three years ago with a common goal and called themselves the Sk8ty Kats. Schrwartz’s daughter, Kenna, was the founding member.

“We raised money and we skate and we hangout and stuff,” said Elle Wall, member of Sk8ty Kats.
They raised $50,000 to fund the park through door to door collections, a silent auction, and donation jars, and lobbyed the EDC for another $100,000 according to Schrwartz.

“It taught them a very powerful lesson in life…If you want something and you work hard, you can get it,” said Schrwartz.

After the city applied for another grant, they were able to secure another $500,000 to fund the construction of the park, according to Schrwartz. A company out of Canada placed the winning to bid, and it only took them a couple of months to complete the skate park.

“We finally have a place that’s safe and legal to skate,” said Macaulay, who is happy that her four kids can enjoy the park, but would still like to see the skate scene grow and the park expand.

Ruby Linn Gamez saw potential in the park. She formerly attended Los Fresnos High School and upon graduation attended University of Texas Rio Grande Valley, earning her bachelors in marketing with a specialty in entertainment marketing. It was her dream to be an event coordinator.

“I had this crazy idea of putting on a skate competition,” said Gamez.