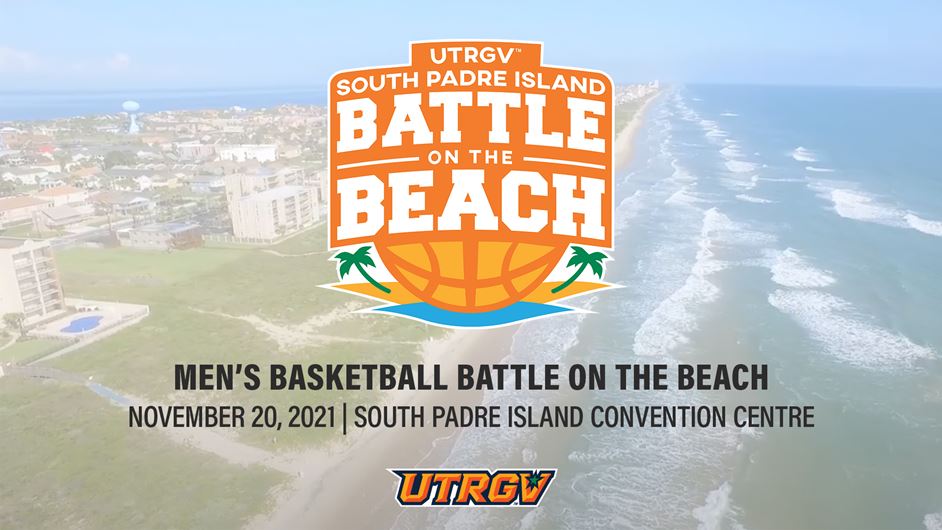 RIO GRANDE VALLEY – The University of Texas Rio Grande Valley (UTRGV) Department of Intercollegiate Athletics announced on Friday that single-session tickets for the inaugural UTRGV South Padre Island Battle on the Beach, featuring men’s basketball games between UTRGV and Northern Arizona as well as Texas Tech and Incarnate Word on Nov. 20 at the South Padre Island Convention Centre, can now be purchased at UTRGVTickets.com.

Tickets are $25 each and include admission to both games.

Current UTRGV students get free admission and will be asked to RSVP for their tickets in advance during the week leading up to the games. UTRGV students will receive an email on Nov. 15 with more information.

Fans looking to stay on South Padre Island between Nov. 18 and 21 are encouraged to stay at the Courtyard South Padre Island. Using the UTRGV group rate, fans can stay over for $135 per night. Valet is included for up to one car per room. Fans can book their rooms online at GoUTRGV.com/Courtyard. To take advantage of the special rate, fans must book their rooms by Nov. 8.

South Padre Island is a tropical oasis located off the southern tip of Texas. This barrier island offers the unsurpassed beauty of the Laguna Madre Bay and the Gulf of Mexico and is the ideal year-round destination for visitors seeking a getaway from the daily grind.

South Padre Island features 34 miles of beautiful white sand and clear emerald water, making it one of the world’s most exquisite barrier islands – and the only tropical island in Texas. Calm weather and water and more than 300 days of sunshine make South Padre Island a great place to visit all year. When visiting during the winter, the warm sun melts away your cares as you stroll down the beach in shorts and sandals. You can close your eyes, breathe deeply, and let go of all the worries you left behind when your trip to South Padre began.

The average temperature range on South Padre Island on November 20 is between 67 and 73 degrees.

With a breathtaking view of the Laguna Madre Bay, the South Padre Island Convention Centre offers 45,000 square feet of space for meetings, conventions, conferences, trade shows, exhibits and special events. The primary facilities include 22,500 square feet of exhibit hall space with a clear ceiling height of 36 feet for large meetings and sporting events, a 2,633 square foot conference auditorium, and 9,000 square feet of breakout space. A large central lobby can also host various exhibits and functions. The Sunset Terrace adjoins the lobby, providing the perfect setting and view for an outside reception.

This is the third time that Texas Tech has ever visited the Rio Grande Valley, along with a game at what was then known as the UTPA Fieldhouse on Nov. 30, 1991.

Texas Tech is coming off an 18-11 season that end with a trip to the second round of the NCAA Tournament.

This will be the fifth-ever matchup between UTRGV and Northern Arizona and the first since Dec. 8, 2010. This is Northern Arizona’s first trip to South Padre Island and third trip to the Valley. The two previous games in the Valley were right, as they were each decided by five points.

This is Incarnate Word’s first-ever visit to South Padre Island and just its second visit to the Valley after previously visiting the fieldhouse on Nov. 10, 2006.