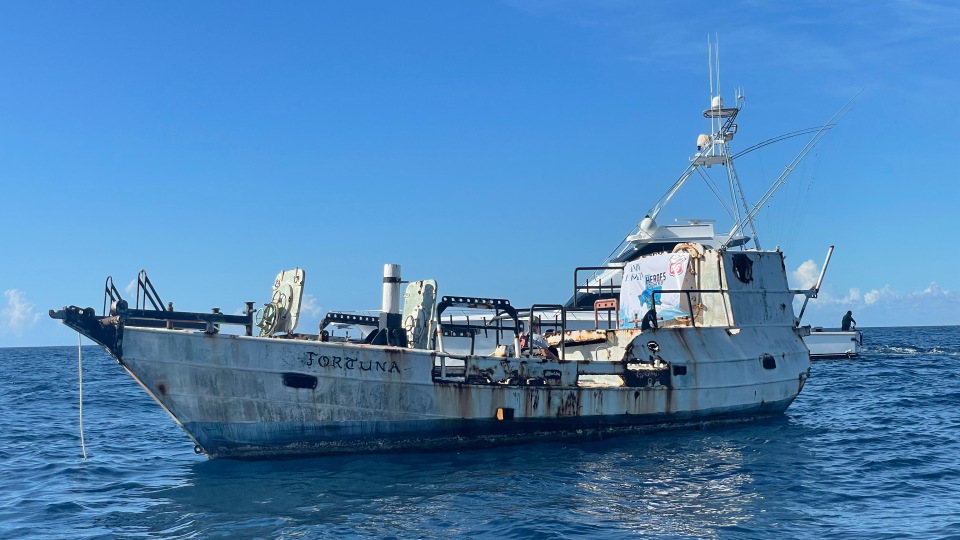 SOUTH PADRE ISLAND, Texas (ValleyCentral) — Three retired boats were sunk off the coast of South Padre Island, Tuesday morning. They are the latest additions to a first-of-its-kind, artificial reef that is helping boost a major source of revenue for the island.

Dozens of island residents watched two retired boats sink 12 miles off the coast of South Padre Island on Tuesday morning, many of them on local charter boats who come through every time they get a call from Friends of RGV Reef.

Friends of RGV Reef is the non-profit organization responsible for building the largest artificial reef on the Gulf coast. Their mission is to restore fish populations in the Gulf of Mexico by creating a habitat that supports fish throughout every stage of their life.

Since 2016, the non-profit has been sinking donated materials such as boats, railroad ties, cinderblocks, broken concrete, and large cable spools. These materials have been found to create the complex habitat needed for nursery fish to survive. One of the main goals is to increase the population of Red Snappers, as it is a big contributor to fishing tourism on the island.

While there are already millions of dollars worth of material sunken in the 1,650-acre plot of the gulf, there is much to still be learned about the efficacy of the reef.

President of Friends of RGV Reef, Gary Glick, said they have been fortunate to work with the University of Texas Rio Grande Valley in building the best practices for the reef and add that their partnership with Dr. Richard Kline influenced much of the design of the reef.

“Every way that you can gain information on what is going on in the reef is very important,” said Glick as he explained that Dr. Kline was the first to observe the lack of accommodation for nursery fish in artificial reefs, a vital factor in being able to nurture game fish to adulthood.

Dr. Kline and graduate students in the Ocean, Coastal, and Earth Science Master’s program have been conducting research on Red Snappers out on the reef. He and two of his students boarded Captain JW Watson’s boat Tuesday morning to conduct some research and assist with sinking the three boats.

Keegan Angerer and Marybeth Weihbrecht are both in their second semester of the program and are both conducting research on Red Snapper populations on the reef using different methods.

Angerer uses a remote-controlled underwater camera to photograph portions of the reef and count the number of fish in those areas. Because the reef is built in different sections that vary in type of material and how far apart the material is arranged, Angerer’s research will show what practices produce the most fish.

“It’s an experimental design so that we can get multiple replicates of each array, and we’re trying to figure out which one is the most efficient. Is one pyramid going to get us a ton of juvenile fish or is 16 better?” said Angerer. “We’re going to visit each site and get a look at how many fish there are, what size are there, what kind of fish are they to get an idea of what’s working.”

Weihbrecht’s is conducting her research by tagging Red Snappers to find out where they are going and how much they have grown. Weihbrecht has gotten the community involved by asking local charters to help tag fish and asking local restaurants to donate gift cards as prizes for fish that have been caught. Since she began tagging a few months ago, she said 7 to 8 fish have been caught and is expecting more to be caught during the Fall.

“Sometimes when he takes his ROV [camera] out there, we see the tagged fish, so we know they’re out there,” laughed Weihbrecht.

Angerer and Weihbrecht were both on the boat helping Dr. Kline cut large buoys off the boats that were sunk. The buoys help make sure that the boat lands flat on the gulf floor. While it is a rather dangerous endeavor, Dr. Kline said they are expensive and best reused during every sinking.

Before the boats arrived for sinking, Dr. Kline gave Captain Watson the precise coordinates of where the boats were to sink, so that they could be marked with small buoys for the tugboats to find and guide them there.

Glick credits the heavy community involvement throughout the entirety of this project for its success so far. It is estimated that 240,000 Red Snappers were grown from juveniles to adults from 2017 to 2019.

He encourages the community to keep supporting the reef as it has already shown to support the fishing tourism industry on the island, as well as the research being done by Dr. Kline’s students. To find out how you can support, you can visit the RGV Reef website.