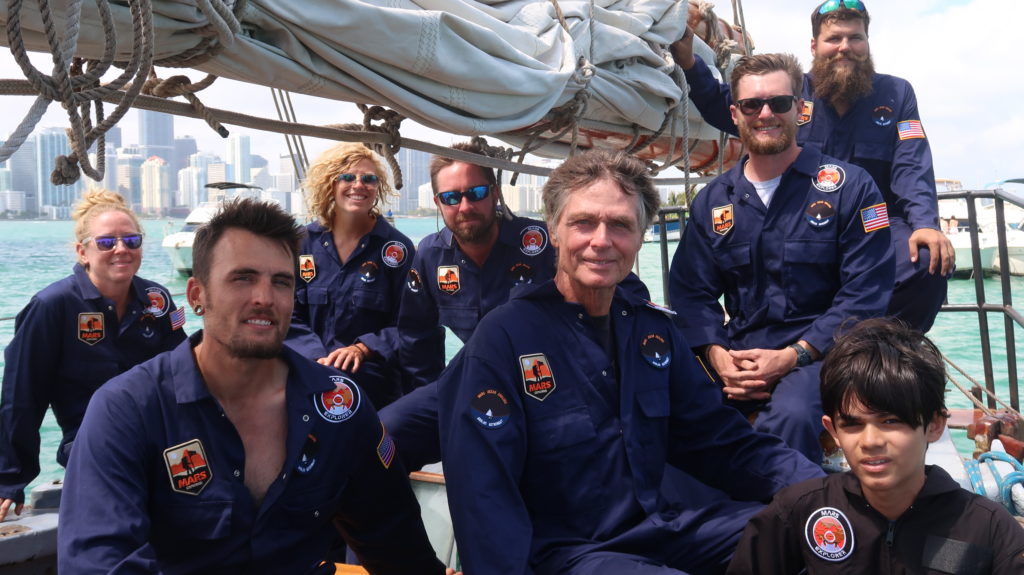 The crew of the schooner Anne. The crew is sailing from Miami to SpaceX’s Boca Chica facility, to propose a Mars analog mission to CEO and founder Elon Musk. Photo courtesy of Soanya Ahmed.

A crew of sailors is leaving today for a two to three week journey across the Gulf of Mexico, bound for Boca Chica to tell SpaceX founder and CEO Elon Musk that they can train the first people on Mars.

Aboard the 40-foot sailboat Anne, the crew proposes they can train the first astronauts headed for Mars, in a human analog mission on the sea.

Analog missions are training scenarios that mimic the environments of space, usually in remote, harsh environments.

The crew is led by Reid Stowe, an artist and sailor based in North Carolina, who holds the record for the longest, non-stop voyage at sea, at 1,152 days. The journey, called the Mars Ocean Odyssey, was Stowe’s first intentional analog mission, never resupplying.

Stowe, Soanya Ahmed, John Wolfe, Eric Goss, Andrew West, Gwen Whitney and Kate Wicks, all of whom are from North Carolina, will anchor offshore once they arrive in the Laguna Madre’s waters in two to three weeks, then take a speedboat to the coast of SpaceX’s Boca Chica facility, weather permitting. They plan to march to the gate of SpaceX’s Boca Chica facility, adorned in space suit-like uniforms, with a banner reading “Mars Ocean Analog,” the name of their mission.

From there, and if SpaceX accepts their proposal, Stowe and the crew will base their training operation in Port Isabel. Upon arriving at SpaceX’s Boca Chica facility, Stowe will launch another analog mission with four astronauts from Latin America for two to three weeks, starting between Apr. 22 and Apr. 24. Then, a third analog mission will embark with an all-woman crew led by Alyssa Carson, an undergraduate student at the Florida Institute of Technology and space enthusiast. Carson, at 20, has had multiple trainings for space travel.

“We have a program that we know is very relevant to Musk wanting to send humans to Mars, so we’re going to go directly to the source,” Stowe told the PRESS. “It’s really one more test to add to all the tests those astronauts have to take before they go to Mars. They want to be as well trained as possible, so that the human mind and soul isn’t the weak link in this incredible multi-billion dollar technological program.”

In 1987, Stowe journeyed to Antarctica by boat, realizing after that the expedition could serve as an analog for a mission to Mars. Because of the many dynamics of the people on board and the environment they were in, Stowe believes extended sea travel is crucial training for astronauts.

“To go on a boat at sea is to know that you have to surrender to the sea,” Stowe said. “When you’ve got a group of people living together that know that they could die and they’re overcoming their fear and working hard to stay alive. The psychological parallels to what a Mars trip is is much more (on the sea) than on habitats on land.”

Stowe and the Anne crew have notified SpaceX of their journey, he said, with SpaceX supporting the analog mission. SpaceX told them they had to be sure not to come during a test, when Cameron County orders the beach and access roads closed.

Stowe said if SpaceX doesn’t accept their proposal, he and the all-women crew led by Carson will sail to New York City. If SpaceX does want to work with Stowe, analog missions will be based in the Gulf of Mexico, with the home port in Port Isabel and or SpaceX’s Boca Chica facility.

While at sea, Reid and the Anne crew will communicate via satellite phones and updates on their website.